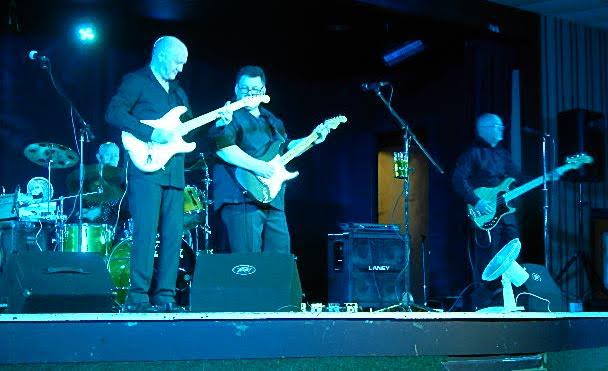 Music is fun, Right? Or at least it's supposed to be. I've always thought that if you play in a band you do it to enjoy playing and when you get paid for it then you are worth the money you earn. The best thing about being in a band other than playing music you really like, is being out with your mates, or as you Americans say, your buddies. To me, getting along well with all the other guys and enjoying their company is the number one priority.

On the whole the relationship within the band is really good, no ego's getting in the way of getting things done and a common aim of being the best band we can be. At our age some of the younger guys are leaping about a bit more and what have you, but we put on a good show.

For the first time in our two years, coming up to Christmas and the new year an element of rot set in between the guys. And what was it caused by? One of the guy's wife putting her oar in where it was not needed. One band member always brings his wife to a gig - nothing wrong with that at all and she is most welcome. But the three other wives leave "the band" to manage and get along with running things, Keeping out of band business and not giving any opinions. We all try and bring what we have to the party for the benefit of the band. But we will call this wife Carole, it's not her real name. But Carole likes to pass comments and organize where she is not required, and when she has had a few drinks she becomes a little different. One night the band has played a gig, it's a month or two away from Christmas and the club we are playing wants to book us for new year at £600. Not a fortune, but £150 in my pocket is well worth it to me as I have been out of work for a while. The figure is being negotiated and behind the door from where the guy who says yes is, Carole is giving me grief that we are not asking enough and we should be going out for £1000 on new years eve. Well, that was the case in years gone by, but the Working Men's Clubs don't have the money they once had and depending on which club you are at, £600 is very nice for an evening's work. Every one of us agreed, having raised the guy up from £400 to £600. The very next day Carole's husband says he won't do it. We all agreed that all he was doing was making a point with his wife. We didn't do any think about it as it would not have been in the bands interest and I am not interested in scoring points over any one. But Carole had been coming to gigs and muttering things to our bass player such as "Mark hates me", which is nonsense, but I was getting tired of her antics, which usually start when alcohol is involved.

So, what do you do? At one point I was ready to leave and call it a draw, or even get a replacement for the band member concerned. But putting my business head on I knew that if the situation could be manged without any further upsets, the band would progress because the basic line up is right and the formula we have seems to be successful. I talked it all over with a couple of friends who are musicians in working bands to get their perspective on the situation, they were pretty much on my wave length, One of my friends said "it's your band, don't put up with it", another said "the next time you get up to play tell the audience that Carole is going to sing the next song, and when she looks and says I'm not in the band, then tell her to stay out of band business". No

What I decided to do was not stir the pot. As we had a few weeks of playing, I decided to leave things alone and calm down. We all e mailed each other with Christmas greetings and took a break. Coming back together in January to rehearse a couple of new numbers there was no ill feeling, every one got along really well as we do 99% of the time and we had a good get together, and added a superb version of Roy Orbison's "Pretty woman" to the set. We played it at the first gig of the year and it went down a storm. We are also adding "The Summer of 69" into the set list because almost every where we play we get asked to play it.

I think think the moral of the story is use your head and stay cool about these situations, and if there is a way to avoid a rift, find it and implement it so that the good of the band is the first thing. I still believe that each member of our band is a really great guy and we all have our own flaws and imperfections which we just have to live with. We get on well and it shows in the music we play and the gigs we put on. My big buddy in the band is our bass player, Shaun. He has been my mate since we were kids and he is the opposite of me, he's extremely quiet and will never come down one way or another in a band disagreement, which can be very frustrating. On Stage he is like Bill Wyman, he just stands and plays, never cracks a smile.... But we compliment each other, sometimes I bring some life into him and he will get more animated and he will keep me level headed when I need to be, it's a good balancing act - like an old fashioned set of scales with a half pound weight on one side and two two ounce weights and four four ounce weights on the other side. The scales are balanced by the same weight but coming in different formats.

I did hold back from phoning round for gigs at the end of the year, because I wanted to see what happened, but now that things are steady I shall be seeing what's going on and trying to find some new venues to play at.

As far as guitars go, I would really like to add a couple to the stable this year. I would love a Gretsche and also something like a Duesenberg. I really have a fancying for something that looks fantastic on stage, maybe in candy apple red or some finish like a blue sparkle. Anyway, I will add a picture or two of what I have in mind.

Best wishes to all and thanks for reading.