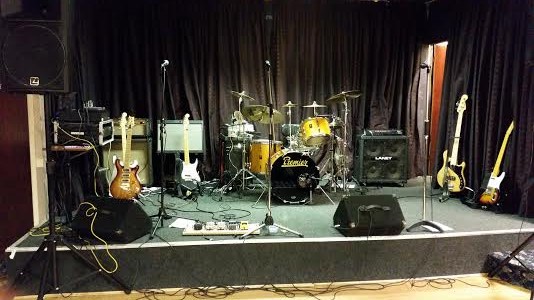 Where on earth do I start with today's entry? I seriously don't know where to start on this one.

The news of the band is that after six weeks out, our superb drummer Allen has returned to playing with us. It's great to have him back, I know exactly when he will hit the beat and when to come in. I've missed his playing. Although, through having a dep drummer, I have made a really good friend in Tony and we are going to meet up socially and build on our friendship. He's made friends with Shaun and I and also our drummer Allen, who phoned him to thank him for standing in for him and helping us out.

I was hoping that all the troubles I have written about so far with Mrs Satan had calmed down, but sadly this has not been the case. While setting up on stage at our best venue two weeks ago, totally unprovoked, she said at the top of her voice so I heard it that I sounded ****. I did not rise to this and ignored it. We played two good sets that night, with the crowd up on the dance floor all night. This was out last night with Tony drumming for us and we had a good time. Lots of pictures were taken, which I have yet to get onto my lap top.

Fast forward one week to last Saturday and we have a gig at a social club and Allen is back with us at last. However, our other guitarist and his wife came and as soon as she sees me she is making comments to the others. After the fist set her husband announces he is leaving the band, and at that point his wife joins in and is abusive and nasty, all of it aimed at myself. This is in a public room at the venue and we don't need it, I said this is not the time to have this discussion, wait until later. However, she and drink don't mix and she is off at full throttle. At this point Allen is telling her to shut up and also saying that this is not the time or the place.

We played our second set and then things got nasty, and there was no going back. What was a real shame for me was that my son was up from where he lives 250 miles away and came to watch us for the first time, and he had to see it. Mrs. Satan was just so nasty but Allen, was not having it and said that the problem isn't Mark, it's you. She then started on him. It was a no win situation for anyone. We got them packed up and on their way home first and the three of us had a chat. We all agreed that this could not go on any longer. She had been making her nasty comments and digs for six months and the three of us have had enough. We were not going to ask him to reconsider and stay with us. I had got to the point where I just didn't want to go out and gig with the band and I considered leaving myself at Christmas.

Shaun, Allen and myself gave it a few days before we phoned each other to see how we felt, and we all felt the same. Move on and get some one else. And that is what we are doing. I went on a website to advertise for a new guitarist and look to see who wanted to join a band. I found an ad placed by a guy who lives in the same town as Shaun who is looking for a band and got in touch. He is the same age as us and after a chat we found we are on the same wave length. I've sent him our set list and we are going to have an audition for him in about two weeks after next weeks gig. I explained everything to him and he said he had experienced the same thing in a band he had played in. he seems a good guy on the phone, if he fits in with us, then he's in and we're up and running again.

This has been quite upsetting for me, I have put up with so much nastiness and let it go, but last week was it for me, and there's no going back. We are all relieved that we will not be having this awful woman come and poison the good spirit we try to have in the band. It has worn us all down and we've all had enough. I'll let you know how we get on with the audition, it needs to work as we have gigs to play.