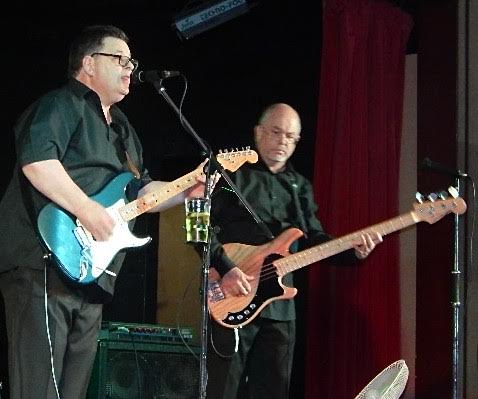 We're having quite the time in our band just now, we finally feel we are rid of the troublesome pair that was our last guitarist and his wife. We thought we were rid of them after our last gig but they could not let things go. They were sending us e mails, phoning our bass player, they phones my home to cause trouble but Mrs 555 is not a woman you trifle with. She answered the phone and told Mrs Satan never to call our home again and to stop causing trouble. So far she has not made any further attempts to call our home. They have also tried to cause a lot of trouble for us by phoning our venues and cancelling gigs, telling the venue that the band has split up or changed its name and they would take the booking over. When the venues found out the truth, they were not at all happy about being lied to and being used in some petty game to cause trouble. One venue rang them back and told them that they were now black listed and would not be welcome there again. I cold go on but you get the picture. I cannot believe that we ever got involved with such people.

Over the last few weeks we have been busy holding auditions for a new guitar player. On the whole it's been a pain in the neck. We've had some good players come but some of them wanted to be THE lead player and just have us back them, which is never going to happen because the ethos of the band is to ensure what is best for the band and have it sound as good as possible. We had three guys who said that they wanted to join us and then before the week was out they gave back word, two for the reason of wanting to be the main man in the band and the other because he had decided, in the space of three days to move to Vancouver. We got to the point where we were cancelling gigs so we thought we would just take our time and get the right guy in.

This last week I was looking on a site called "Join My Band" and found an ad from a guy who wanted a band to join and he lived in the locality we rehearse at so I talked with him for a while and tried to ascertain where he is at musically and competancy wise. We decided to meet up this Saturday (today) and have a session. It turns out that Wishbone Ash are his favourite band, as they are very much one of the favourite bands of myself and our bass player, and he is a friend of Andy Powell. We also both know Wishbone Ash's new guitar player. But that is by the by. What it does mean though, is finally there was a guy who would play some Wishbone Ash numbers in the band. So we set it up.

He came at the agreed time, and we had two hours. He had not had time to learn our set having only two or three days notice, so I just asked him to play lead on certain numbers and invited him to take leads where ever I could and he did just fine, so we know he has the ability. We offered him the place in the band and he accepted. When I got home I received a really nice e mail from him thanking us for giving him the job in the band and promising to be committed and to learning the songs we need him to. What more can you ask?

We are slowly building our PA up as we need to do so. Our good friend and fellow forum member Peter Alton is selling some nice speakers, stands and cables as he is thinning his gear out (but not his guitars. On a side note he has just sold a 1962 fender 15 watt valve amp that sounds fabulous). So on Tuesday I will pick those up from Peter who lives about sixty miles from me. Peter is a true gentleman and I consider myself fortunate to have him as my friend. It was Heritage guitars that really sparked our friendship as Peter was working one day a week at a guitar shop (not that he needed to) I used to drop in at and as we got to know each other I mentioned that I wanted a Heritage 355 and that I was tired of the Gibson Corporate attitude. It was that which brought us together as Peter at that point, and still does own two very nice Heritage guitars, along with other superb guitars which you will be lucky to see in any retailer.

Anyway, the constant in the band has been our drummer, bass player and myself and we want to keep control of our sound system so we are not left without one again. Although our PA amp is older, it works and is powerful enough to do what ever we need. in case you are wondering, it's a Peavey 600 watt mixer amp. Our new guitarist has a mixer, so we will see how that can enhance the situation.

We really hope that this is now the end of auditions and the start of the new constant line up. our new colleague seems more than willing to learn the songs and parts he needs to. When he comes back from his holidays we are going to have three good rehearsals before we start gigging again.