It seems like a long time since I last wrote in my blog, yet lots has happened. For those of you who read my blog, you will recall that we were auditioning a new guitar player. Well, Robin is now well and truly embedded in the band and is taking on his share of the load. He's a Les Paul player at heart and his go to guitar is an RI that cost an arm and a leg, but I have managed to switch him on to Telecasters, which he uses on Honky Tonk Women. He's become a real member of the band and has a huge input. I did actually buy the PA from Peter Alton.

Would you believe it , the old guitarist and his wife were still causing us trouble and making a nuisance of themselves well into this year, but finally we seem to have them off our back. they even contacted Robin, our new guitar player.

Just when we thought we had the band settled again, we were hit with another problem. Allen, our terrific drummer, had to retire from drumming because he was in too much pain from arthritis, it was making playing impossible and after our last gig of last year he called it a day. I was straight on the phone to Tony, who had stood in with us before and who had said he would gladly join us if Allen ever called it a day. Well, it turns out we missed getting him by two weeks as he had joined a band and was committed to them. However, he has played a couple of gigs with us and we have had a great time playing with him in the band. We held the usual auditions and had the usual range of ability or inability... One guy turned up and by his own admission didn't even try. We did eventually find a cracking drummer called Pete and offered him the job there and then, he accepted and we thought "great, we're away here". He played two gigs with us and three days before the third gig told us he was leaving to join a prog rock band. So, back to the drawing board. to cut a long story short, we offered the drum seat to a really nice guy called Rob, but after one gig it became very apparent he would not be able to make many gigs because of his work as a prison officer and his shift rota. So, back to the drawing board. Our Bass player has a mate at work who is a drummer, he stepped in totally cold and helped us out on a gig, and as we liked his as a person and a drummer, we offered him the gig. He went home to think about it and left the band he was in to join us. Sadly, when he told them he was leaving they got unpleasant and gave him a hard time. Well, he's more than welcome with us.

Now our aim is to put some more songs into the band and open the set list a bit. Two must do songs are Brown Sugar and 19th Nervous Breakdown by the stones, along with some other standards that go down well.

We have also bought more lighting, which is a side we want to expand and make the gigs a little more professional. we know we are not a big name band, but we like to try and offer our best. Also we are working on stage craft, looking at what we can do to make more of a show. There's nothing more boring than a band that just stands there. Shaun, our bass player, can be a bit of a BIll Wyman, so we're trying to get him in on the act a bit more. He's a good player and very laid back, so we either play to that or get him moving about a bit.

This year we could not chase many gigs because of line up changes, the priority was getting the band stable. But we've made a fair few friends along the way and we will get plenty next year. e

On the Heritage front, I have put a Duesenberg Les Trem on the 555. There is no drilling and all you do is swap the stop piece for the trem, which is very neat and tidy. Duesenberg trems are superb and it's given the 555 a new lease of life for me and it's been great to gig with, superb on a good old rock and roll where you can just get a bit of sizzle on the pick ups. I couldn't upload a picture of my 555 so I have posted a picture of a Duesenberg with one of their trems on it, although the one in the picture is very different to the one on my 555 fixing wise. I love the Duesenbergs, maybe one day I will get one. 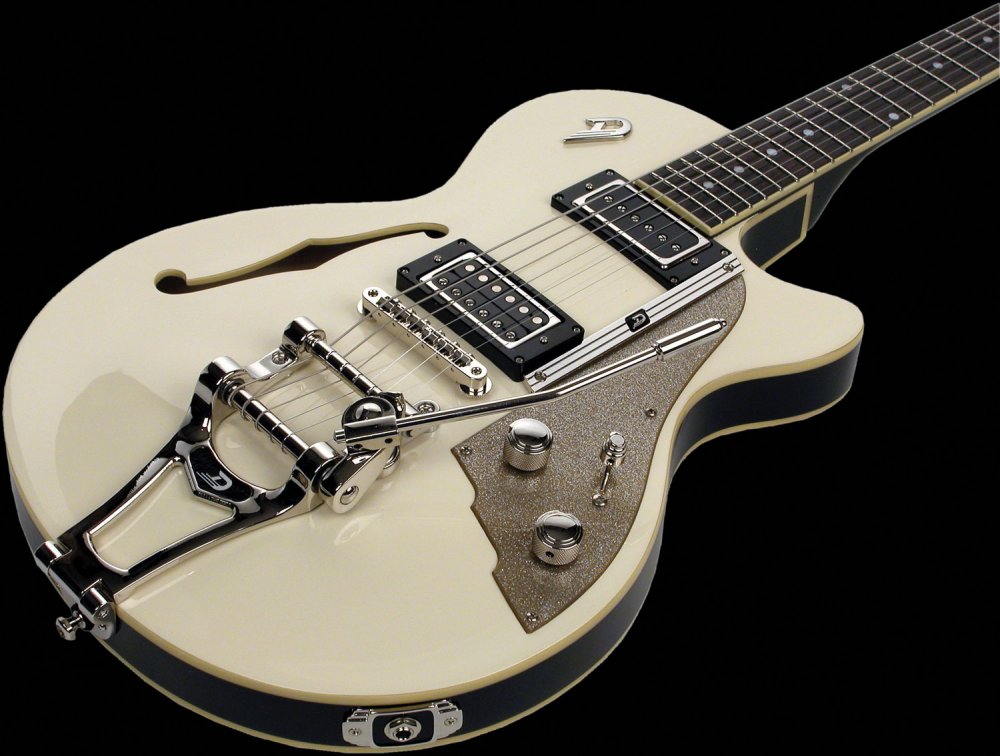