By DetroitBlues
August 18, 2022 in Heritage Guitars

Only if they landed on a bunch of accordions. 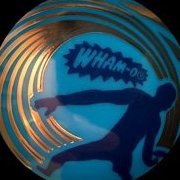 I am a little surprised they don't make 555's anymore as well as the Millie.