By MartyGrass,
January 17 in Heritage Guitars

Forgive me.  The only issue regarding the Heritage headstock is one of subliminal cognitive dissonance in those for whom it's an issue:  It's not the Gibs*n open book headstock.  And the hilarious iro 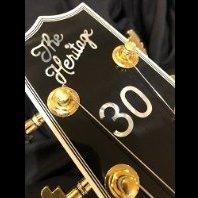 I don't think I mean to be unsettling, but maybe I do.  There is a dark side to the Core headstock design.  Let me explain. Decades ago the Heritage factory owners decided on a headstock.  There